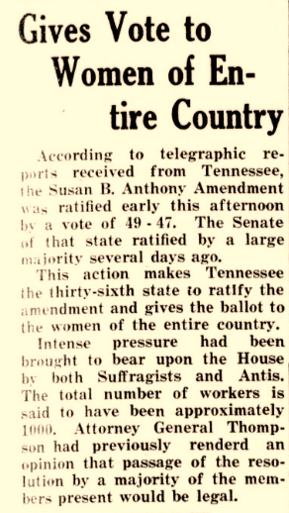 August 18, 1920, both the Newark Post and the Evening Journal ran articles about Tennessee ratifying the Women’s Suffrage Amendment, also known as the Susan B. Anthony Amendment, as pointed out by the Newark Post.  Tennessee was the thirty-sixth state to ratify the amendment, thus satisfying Article Five of the U.S. Constitution which requires that three quarters of the states must ratify an amendment for it to become law.  (Keep in mind that there were only 48 states in the United States of America in 1920, and that now, 38 states would be required to pass a constitutional amendment.)

Unfortunately, Delaware did not ratify the amendment until March 6, 1923. 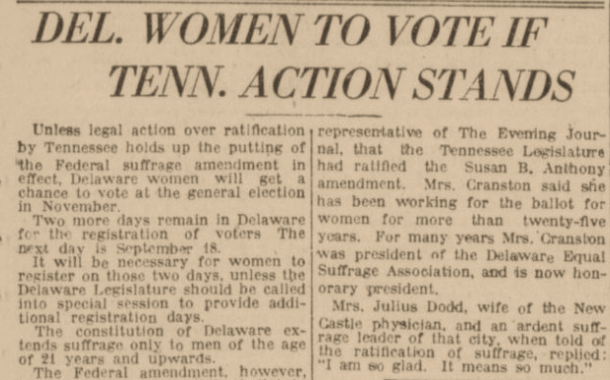 The Newark Post article merely reports on the passage of the amendment in Tennessee, while the Evening Journal goes on to detail that women in Delaware have only two days left to register to vote, and that while the passage of the amendment supersedes state constitutions, it is unclear if women would be allowed to vote only for the United States President, Vice-President, and Delaware congressional representatives (senators and congressman), as they are Federal offices, yet be unable to vote for local and district representatives until the state had ratified the amendment and made any necessary amendments to the state constitution.
Library, Museums and Press
181 S. College Avenue Newark, DE 19717-5267