Holidays during wartime are always a bit constrained, or at least different.  In July of 1918, World War I, then known as The Great War, was still going strong.  Probably more by happenstance than by planning, nearly one hundred vessels were launched at US naval bases around the country on July 4, 1918, according to the July 13, 1918 edition of the Middletown Transcript. 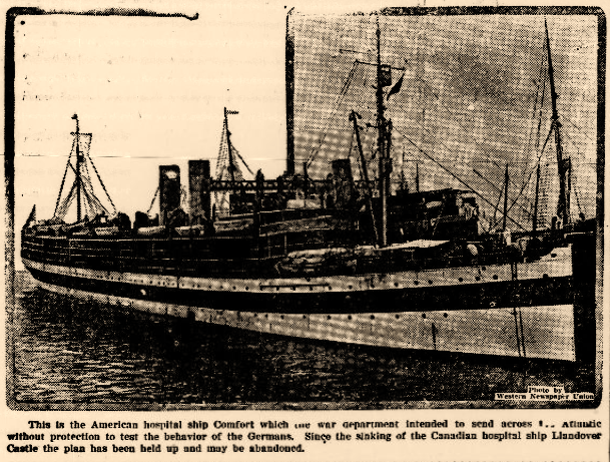 One of the vessels launched was the USNS Comfort, a hospital ship run by the United States Navy.  The Comfort was originally a passenger steamer that was refitted and recommissioned as a hospital ship.  Between the start of her service in July of 1918 and her retirement as a hospital ship in September of 1919, the Comfort made three trans-Atlantic cruises, bringing home 1,100 injured soldiers.  After World War I, the Comfort was repurchased by the Ward company and refitted back to a passenger steamer.  Eventually, the ship was salvaged by the military again and was first a troop transport in World War II and then became a hospital ship again, this time as USAHS Shamrock.  The vessel was scrapped in 1948.  (Extra information supplied by Naval History and Heritage Command and Wikipedia.)

There is still a hospital ship Comfort, currently the third vessel to bear the name, in service.  The current vessel was converted from an oil tanker and is available to respond to medical emergencies and mercy missions in the Atlantic.

Middletown Transcript journalist Edward Pickard wrote, “Though last Thursday was not so noisy as the old-time Fourths, there was one most glorious noise that, figuratively speaking, must have been distinctly heard in Berlin and Vienna.  That was the “grand splash” when about one hundred vessels were launched at the various shipyards of the country.”  He further reported that the number of ships and the gross tonnage of the ships launched in the fiscal year had set a record.  The efforts of the US Navy and the navies of allied countries was also reported to have had a devastating effect on enemy vessels.  Pickard reported that the chairman of the Naval Affairs Committee had reported that sixty-five percent of enemy submarines had been destroyed by American and allied forces, and that enemy vessels were now being destroyed faster than German shipbuilders could replace them.

Pickard went on to detail more reports on the Great War that were favorable to the United States and allies which, to him at least, seemed to do as much for American morale in 1918 as normal “noisy” celebrations of the Fourth of July.