November is Aviation History Month, and #ChronAmParty is celebrating with #PlanesTrainsAndAutomobiles!  The November 11th edition of the Evening Journal highlighted the then-new technology of planes.  Additionally, the focus was on women flyers and what to call them.  According to the article, the term settled on was “Aeroines.”  This referred not only to women who flew airplanes, but also those who flew hot air balloons and zeppelins. 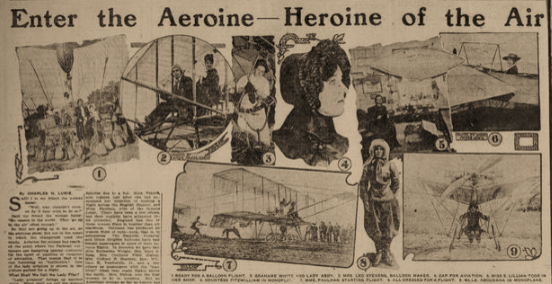 The article mentions that at the time, there weren’t any American aeroines, but there were a few in Europe.  Instead, America was able to boast of the only female airship designer, a Miss E. Lillian Todd from New York, who designed a collapsible airplane.  Miss Todd may very well have been a contributor to the designs of modern fighter jets that have collapsible wings for storage on United States Navy aircraft carriers.