Some subjects may not be suitable for an April Fools joke, as the April 5, 1913 edition of the Evening Journal, reporting on events in France, shows. 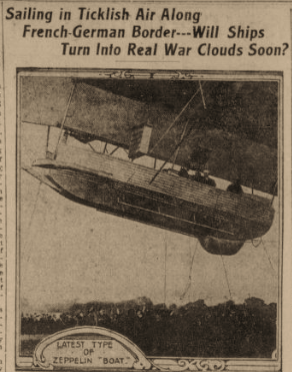 According to the article, a Germain airship, a Zeppelin, lost use of its propeller and was blown off course and landed in a French field, where a brigade of French riflemen were drilling.  A newspaper in Rheims quickly learned of the incident and reported a sensationalized version of the Germain airship’s landing as if it were related to the mounting tensions between Germany and France.  Other journalists and photographers were dispatched to the site, only to learn that the situation was under control and the sensationalizing had been part of an April Fools joke.  The result was the smashing of windows at the Rheims’ newspaper building by a mob who was not amused by the prank and official censure from the French government.

Fortunately, no one was injured.  After the French were convinced that the German crew were not spying on the French border, the Germans were returned.  The article indicates that the airship was kept for further study by the French.