June is Adopt-A-Cat Month! This month sees an increase in the number of kittens, and groups such as American Humane and the ASPCA encourage people to adopt cats. Sometimes, however, it’s the cat who does the adopting.  According to the Evening Journal of April 18, 1892, an unnamed farm cat adopted five abandoned baby squirrels. 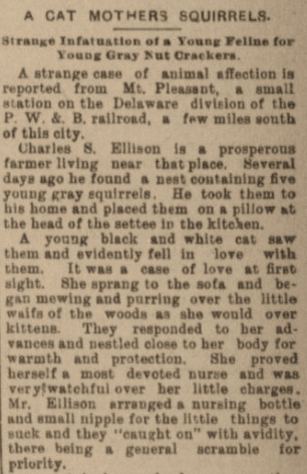 According to the article, the black and white barn cat instinctively cared for the baby squirrels by providing them warmth and protection while Mr. Ellison, a farmer, bottle-fed them.

In April of this year, ABC News reported a very similar story of a cat adopting baby squirrels.  While the world has changed significantly between 1892 and 2019, our feline companions are still doing their part by adopting animals in need.