This year, 2020, is, among other things, a year where the United States of America conducts a census, as it does every ten years.  The census is more than just counting people, however; it’s also a way to take stock of resources.  As such, there is a lot of preparation for the census. 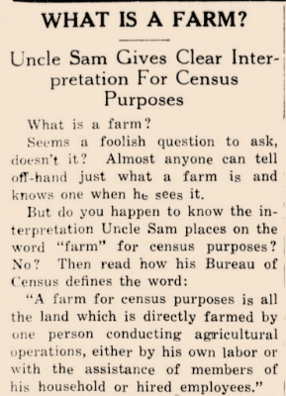 The Newark Post of November 5, 1919 provides one such example.  The article describes the definition of a farm for census purposes, noting that the average back yard vegetable garden is too small to be counted, and sets as a threshold of three acres to be considered a farm.  Other such thresholds include needing employees or assistants to care for the area or livestock and how much the farm produces in sales per year.  Other details, such as a landowner parceling out land to other tenants thus creating what would be counted as a separate farm are also detailed in the article.

And this was just for farms.