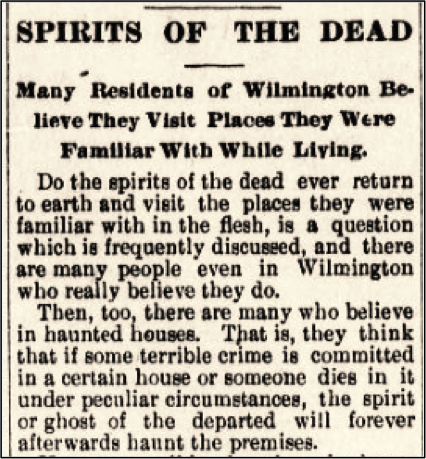 An article in Wilmington, Delaware’s The Sun on December 11, 1898 highlights a property in Wilmington that is believed to be haunted. As the story goes, a Mrs. James Arnold was cooking in her Wilmington home when her dress caught fire. She ran into the street for help, but the outdoor air only fed the flames, and she soon succumbed to her injuries. Her distraught husband moved to the countryside where he later died.

When a Mr. John Murphy bought the house, six days passed without incident. On the sixth night, while lying on the sofa, he thought he saw his wife and asked her for a glass of water. When the figure approached him, however, he saw it was an apparition a lady who was not his wife. The apparition said nothing and instead turned and vanished. Believing this was, indeed, the spirit of the late Mrs. Arnold, Mr. and Mrs. John Murphy packed up and moved out the following Monday.

To read more about the hauntings of 1898 Wilmington, Delaware, read the full story in Chronicling America.