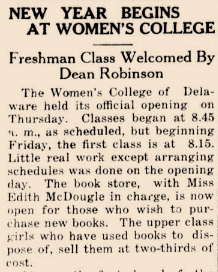 Approximately a century ago, the first day of college may have been less complicated, but it was likely just as exciting for students as it is today. Newark Post of September 27, 1916, described what the freshmen of Women’s College of Delaware had on their schedule for their first day. They were greeted by Dean Winifred Robinson in Science Hall, which would later be renamed after Dean Robinson. The main buildings of the Women’s College of Delaware were Residence Hall, which is now Warner Hall, and Science Hall, which is now Robinson Hall. 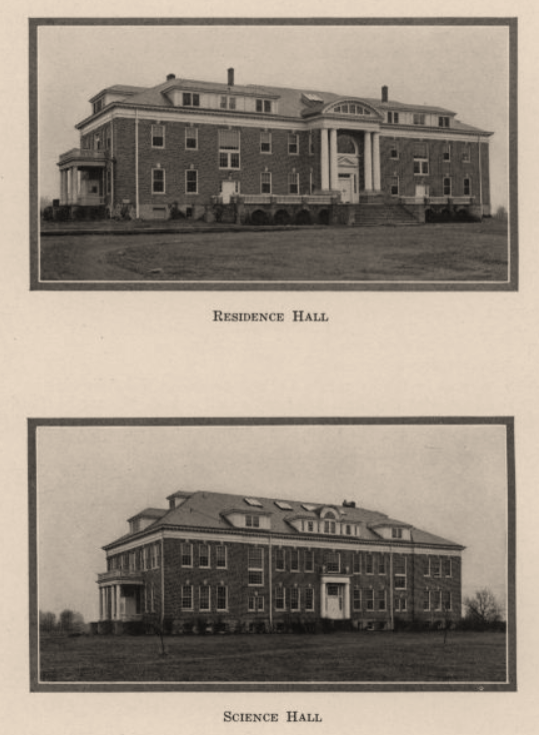 Three years later, Delaware College boasted about its large freshman class which was apparently due to the conclusion of World War I. Newark Post of September 24, 1919, just under a century ago, welcomed 125 freshmen to the college. By contrast, the University of Delaware’s Institutional Research Page indicates that the freshman class of the 2018-2019 academic year has 4,677 students. 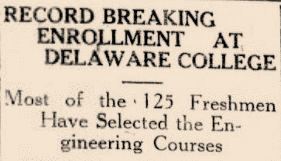 The October 1 edition of The Delaware Review, Delaware College’s student newspaper (now published as The Review), also noted the large class of 1919 and overall population of the college reaching an all-time high. 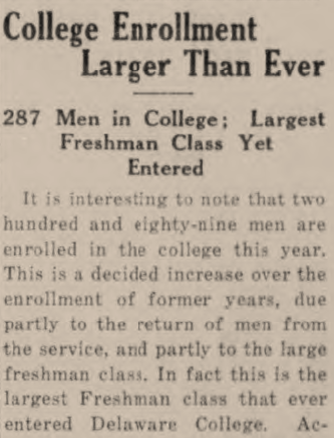 For more first-hand experiences of the first day of college , search Delaware papers on Chronicling America, using search terms such as “first day of school,” “Delaware College,” “Women’s College of Delaware,” or “University of Delaware.”

For more information on the beginning and evolution of Delaware College and the Women’s College of Delaware and how they became the University of Delaware, check out the resources below.

The Delaware Digital Newspaper Project (DDNP) welcomes the incoming freshmen at the University of Delaware and welcomes back the upperclassmen and graduate students, whose stories will no doubt add to the stories contained in local and campus newspapers!