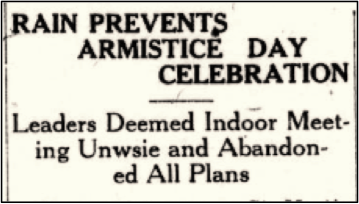 Armistice Day, November 11th, was originally intended to celebrate the end of the War to End All Wars, known currently as World War I, while honoring the veterans of that war.

The first such celebration in Newark, Delaware, unfortunately, was a bit of a wash. Literally. According to The Newark Post of November 12, 1919, the weather did not cooperate and the rain forced the organizers to cancel the parade scheduled for that day, hinting that it would be rescheduled.

Most Americans today will recognize November 11th as Veteran’s Day. However, it wasn’t until 1954 that Armistice Day was changed to “Veteran’s Day” by President Eisenhower. This decision came in aftermath of World War II and the Korean War, with the intention of honoring all veterans. Nevertheless, The Middletown Transcript of November 18, 1922 shows that living veterans of any war participated in the day’s events long before the change was made.