The Evening Journal of February 8, 1910, in advance of Valentine’s Day, posted a small article mentioning the loss of the oldest and largest valentine factory in the country had been destroyed by fire.  The image below shows a typical, early 20th century “valentine factory” with artistry, perforated paper, and lace. 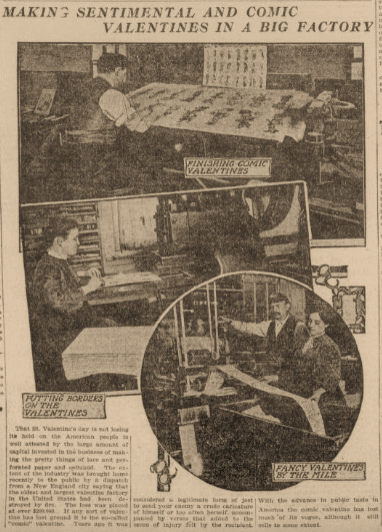 At the time, there were two main types of valentines.  The first was the regular, romantic valentine.  The second was the “comic” valentine, wherein you sent someone (your “enemy”) a “crude caricature of himself or too often herself, accompanied by verses that added to the sense of injury felt by the recipient.”  At the time, the comic valentine was in decline, but seems to exist in some form in present-day card stores.

For an example of what some of the regular, romantic valentines looked like, check out this article from Time magazine from February 12, 2016.  Like the Evening Journal article, Time mentions that, despite detractors of the holiday, businesses that create valentine cards and such are still doing quite well.