As this article from Women’s History details, nursing is both one of the oldest professions around, while one of the younger codified professions around.  That is, family members have nursed one another throughout history; however, it was during the American Civil War that nursing began having any codified philosophy or training.  Schools for nursing were established, and nursing slowly transformed from something a “lady in disgrace” did to something that was considered a respectable profession. 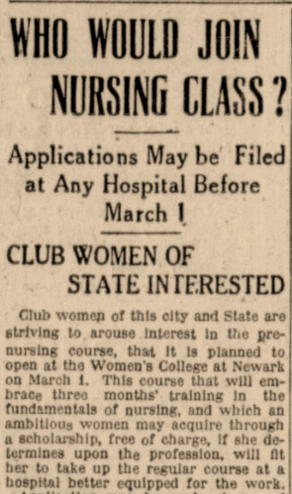 While the University of Delaware now enjoys a robust Nursing and Health Sciences program, the February 18, 1919 edition of the Evening Journal contains this article about the Women’s College of Delaware (which eventually merged with Delaware College and formed the University of Delaware).  This article mentions a course of study for pre-nursing, and from there, applicants could attend one of the nursing schools.  The article mentions a goal of having a public health nurse per county, that there were only 6,000 such nurses before the war (World War I), and that those nurses had been significantly depleted during the war.  In addition to medical care, public health nurses were also trained to distribute supplies equitably, efficiently, and according to need.

Nurses today must not only have a reasonable command of biology and chemistry, but also technology, given the ever-greater range of procedures they are called upon to perform.  The article uses the term “ambitious women,” (and we know the field now includes men as well), which describes the level of dedication one must have towards the study of the nursing profession, as well as the performance of nursing in the Twenty-First Century.

Nurses, we thank you!