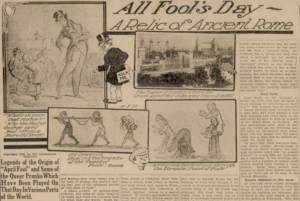 The day of humor and pranks, April Fool’s Day, may have origins in the Roman Feast of Fools, according to the April 2, 1915 edition of the Evening Journal. Although the article mentions that the original Feast of Fools took place on February 17 in Roman times, the date eventually shifted to April 1st, possibly due to the influence of the Indian Feast of Huli celebrated on March 31. The Feast of Huli involved sending people on errands or meetings, only to get there early and hide and watch their friend’s confusion.

April Fools’ Day pranks began as a tradition sometime in the Eighteenth Century, however, this article highlights an alleged prank from the 15th century with the story of Francis, the Duke of Lorraine, and his duchess, who had been imprisoned in the Tower of London. The duke and duchess escape their prison by ditching their clothes and dressing as peasants. As they walked past the guard, someone recognizes the couple and calls out that the duke and duchess are escaping. Seeing only two peasants in front of him, the guard assumes he is the victim of a prank and simply replies, “April fool!” while letting the duke and duchess complete their escape. 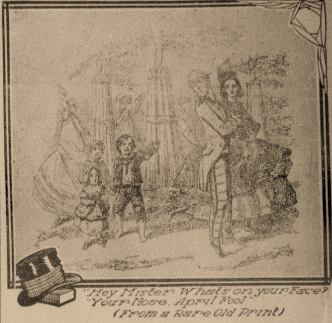 Keep an eye out for pranksters this April Fools’ Day!