As mentioned by the IDFA, July is National Ice Cream Month, so proclaimed by President Ronald Reagan in 1984.  According to the IDFA, Americans consume an average of 22 pounds of ice cream per year. 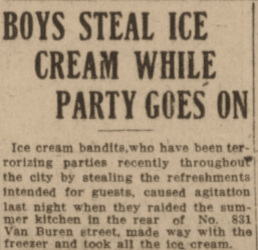 The Evening Journal of October 11, 1913 details a raid on a girl’s sixteenth birthday party where the ice cream was stolen.  According to reports, several boys, in an organized fashion, removed the freezer from the kitchen and brought it to a fence in the back yard, where they unloaded the ice cream, presumably into a waiting vehicle, while the partiers were dancing inside.  The theft wasn’t discovered until some hours later when it was time for cake and ice cream.  The ice cream was replaced for the festivities.

The article indicated that this was not the first such theft of ice cream in the area, reinforcing the idea that it was some sort of organized crime operation.  Though it begs the question of whether the Chunky Money gang moved in to the Neapolitan turf, leaving the Rocky Road organization to grab a piece of the action.