February is Great American Pie Month!  Rather than share a recipe – there are plenty of those to go around – there is instead a pie-centric story from the April 26, 1921 edition of the Evening Journal.  Even better?  The event involved another great American pastime: baseball. 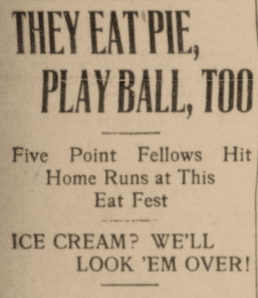 Apparently, there was some sort of fundraiser combined with an eating contest whereby members of the Five Points baseball team and their friends were surrounded by pies and had to eat their way to freedom.  Fifty to sixty pies and twelve gallons of ice cream were consumed at the event.  The proceeds went to the baseball club fund.