In a world of wireless internet, 4G, bluetooth, and, in this case, atomic clocks, the technology of radio seems taken for granted.  Though with satellite radio and local radio stations often having streaming services that people listen to on their mobile devices, radio isn’t as obsolete as some people might think.  However, the Evening Journal of October 18, 1922 featured an article that extolled the virtues of this still new technology, which had just begun to explore its potential. 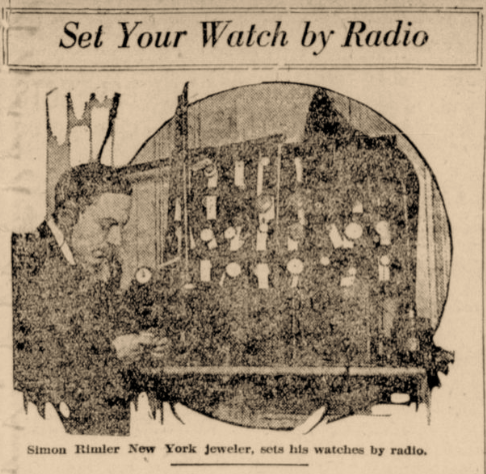 The main article in this edition of the Evening Journal is split into several smaller articles.  One sub-article discussed the use of radio for railway safety, while another sub-article mentioned the benefits of advertising over radio.  A third sub-article claimed radio could cure baldness.  Well, two out of three isn’t bad.

But apparently one feature of radio was to listen to a certain station, which would announce the time.  Those without radio receivers were advised to go to a jeweler’s shop.  Jeweler’s shops often used the radio station’s time announcements to set the watches for sale in their store.

As August 20th is “National Radio Day,” feel free to visit Chronicling America and searching Delaware newspapers for more historical information about radio.  National Radio Day is a fairly recent holiday. Dating back to the 1990s, although not officially recognized by Congress as a “national” days, it still enjoys a fair amount of recognition throughout the radio broadcasting community.