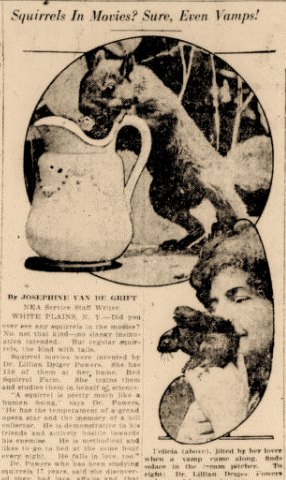 According to the January 6, 1923 edition of the Evening Journal, Dr. Lillian Deiger Powers of White Plains, New York maintained a squirrel farm where she both studied squirrel behavior and trained those squirrels.  Dr. Powers filmed her experiments with squirrels and found that she could train them to act and repeat certain behaviors.

In one observation, one of the squirrels, Curly, jilted his companion, Felicia, with a third squirrel, Maise.  Felicia pined for Curly on a tree stump for a few days until Maise left.  Dr. Powers managed to get the squirrels to re-enact the drama, whereby Felicia pined away on a cream pitcher instead of a tree stump.