Whether or not one chooses to imbibe in celebration of the new year, keep in mind that a century ago, people would celebrate new years with an alcoholic beverage for the last time for 13 years.  As seen in this article from the January 1, 1920 edition of the Evening Journal, there was push back to the push back of Prohibition. 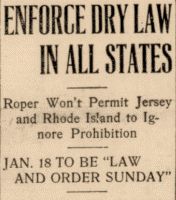 According to the article, several states were considering refusing the dry laws.  In response, commissioner of internal revenue Daniel C. Roper said, “I cannot believe that any state or other political division will consciously bring discredit upon itself by failure to respond promptly to its full legal and moral responsibilities of initiative and cooperation in the enforcement of the national prohibition act.”