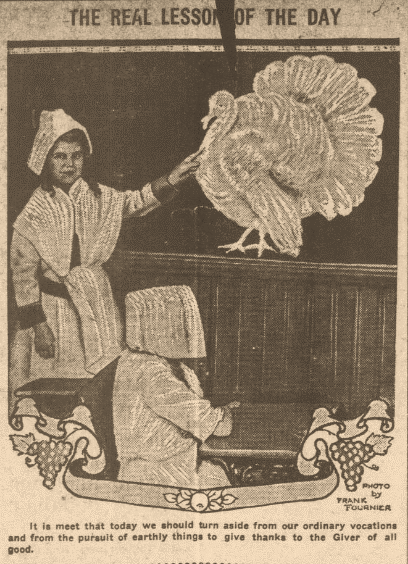 Thanksgiving remains among the top, if not the top, of the most-traveled holidays in the United States, as noted by USA Today journalist Jason Cristiano.  And for first responders, performers, those in the military, and those of several other professions requiring travel, the travel on Thanksgiving may not always be to family.

The Middletown Transcript on November 21, 1914 ran a feature on one of the traveling occupations, those in the theater, and how, even if they weren’t performing on Thanksgiving, may find themselves in another city while traveling with a production.  The feature itself contained stories from several actors and actresses discussing their Thanksgiving memories, some from home, and some while traveling.  Miss Grace Huff related a tale about how she saw a handicapped boy playing with a ball while she was traveling west and felt pity for him.  When he dropped his ball and the ball began to roll down hill, she ran after it, thankful that she would be able to help out.  Much to her surprise, however, the young man had tossed aside his crutch, was also running after his ball, and told Miss Huff to stay away from his ball, which put a dampener on Miss Huff’s Thanksgiving spirit.

Mr. Lowell Sherman recalled a Thanksgiving where he was on the road, was eating a moderate meal in New York, and was so lonely he asked for a telephone to be brought to his table, and then began calling everyone he could “just to hear a friendly face.”

A Miss Woodthorpe recalled a Thanksgiving where she was traveling by boat.  On the boat was a chief of a Native American tribe that was heading to negotiate the release of two other tribal chiefs held by another tribe and joined Miss Woodthorpe and others on the boat for the Thanksgiving dinner.  Miss Woodthorpe also recalls that it was the same trip where someone had demonstrated the use of a small phonograph and she heard, for the first time, a recording of someone else’s voice.

The DDNP Staff wishes everyone a Safe, Happy, and Memorable Thanksgiving Holiday, whether you are spending it with friends, family, or traveling companions!