What images do a state fair conjure?  Are they images of young children presenting pigs, cows, and horses they’ve raised since birth?  Are they images of local homemakers in a contest for best pie?  Does it include the largest watermelon, ear of corn, or carrot grown that season?

I am of the generation where a day at the state fair involved “carnival” rides, such as the pirate boat that swings back and forth and, at it’s highest, threatens to dump you out on a 90-degree angle to the ground.  The day also included plenty of skee ball, catching a headliner concert such as Taylor Swift, and, of course, watching children win prizes for pigs and sheep and people winning a ribbon for best pie and seeing a watermelon the size of a small car.

It was originally intended for this blog post to encourage local residents to check out the annual Delaware State Fair.  Unfortunately, it has already concluded for this year; but keep an eye out for it next year.  The location for the state fair seems solidly in the southern part of the state these days, with some variance in when it is held during the summer.  A century ago, however, the fair was held in the northern city of Elsmere and started on Labor Day, as mentioned in the September 02, 1921 edition of the Evening Journal. 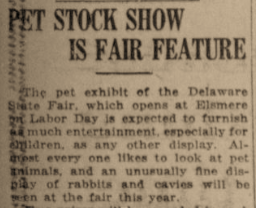 For those who may wonder, cavies are guinea pigs.  The display mentioned above contained rabbits and guinea pigs.

Since the fair is already over for this summer, feel free to check out some of the media available on the fair’s website, as well as media on the fair’s social media sites.