The end of 1918 and the start of 1919 was a turbulent time in American history as well as in world history.  The end of the Great War, now known as World War I, came roughly a month and a half earlier on November 11th, which was called Armistice Day and is now known as Veteran’s Day.  Even though the war was at an end, troops remained abroad in the aftermath of the conflict, and the same issue of the Middletown Transcript of December 28, 1918, asked citizens to continue to purchase war stamps to continue to support troops in their relief efforts to civilians affected by the war.

Despite the devastation of the war and the uncertainty of the future, there was still optimism, at least among the Middletown Transcript‘s contributors and staff. 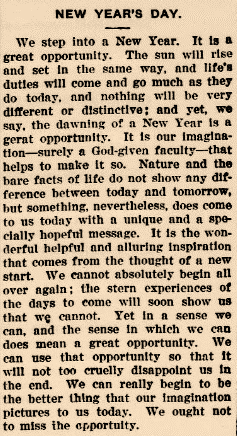 May you have a happy, healthy, and prosperous 2019!