While the Women’s College of Delaware was not the first college for women and while Dr. Robinson’s efforts as Dean of that college were not groundbreaking, both were part of the machinery that led to both colleges for women and co-ed colleges, allowing women to attend classes to become scientists, engineers, chemists, astronauts, like Dr. Sally Ride and Dr. Mae Jemison, and politicians, like Vice-President Kamala Harris, who serve with University of Delaware alumnus President Joseph R. Biden.

The October 10, 1914 edition of the Evening Journal featured an article regarding three major events at Delaware College.  The first was the installation of Dr. Samuel Mitchell as the new President of Delaware College.  Next was the dedication of the Women’s College of Delaware.  Third was the installation of Dr. Robinson as Dean of Women’s College. 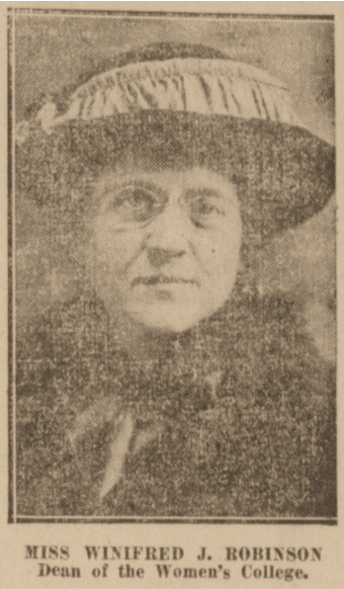 Interestingly, Dr. Robinson is referred to as “Miss Robinson,” despite having earned her doctorate two years prior from Columbia University.