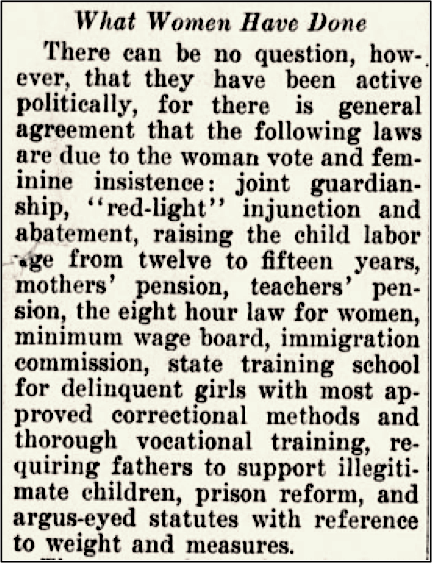 The Newark Post, on November 11, 1914 contained an editorial, detailing the positive political and social results of allowing women to vote. Among the improvements were an increase in the age at which children could legally work, reducing gambling, expanding pension programs, and so on. As shown in the snippet of an article here, women voters, and thus women active in politics, may have started many of the labor benefits we enjoy today.

The article also mentions the struggle for suffrage and equality in other states, such as California, decrying equality a “menace” and Ohio claiming that only ten percent of women wanted the right to vote, when the statistics presented showed a much higher, majority of women wanting the right to make their voices heard in politics.

Read more about the history of women’s suffrage in newspapers from across the country in Chronicling America.