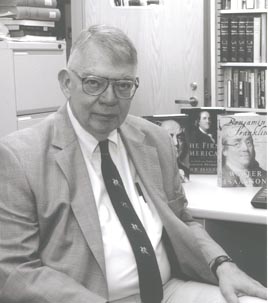 Dr. Lemay has taught at George Washington University and the University of California, Los Angeles. He was appointed the Henry Francis duPont Winterthur Professor in the English Department at the University of Delaware in 1977. He is presently writing a seven-volume, 7,000 page biography entitled Benjamin Franklin: A Biography. The first two volumes will be published by the University of Pennsylvania Press in 2005.

Dr. Lemay has received numerous honors, fellowships, and awards including the Francis Alison Award in 2003. He has been awarded a Guggenheim Fellowship; a Senior Fellowship at the National Endowment for the Humanities twice; an Institute for Advanced Study Fellowship at the University of Delaware twice; a Huntington Library Fellowship; and grants from the American Philosophical Society and Colonial Williamsburg. His students and friends compiled a “festschrift” for him in 2001, Finding Colonial Americas: Essays Honoring J.A. Leo Lemay which will be available for purchase from the University of Delaware Bookstore at the lecture for $21.00 per copy.

Dr. Lemay has published extensively including Did Pocahontas Save Captain John Smith? (1992); The American Dream of Captain John Smith (1991); The Canon of Benjamin Franklin: New Attributions (1986); and Men of Letters in Colonial Maryland (1972); His website, A Documentary History of Benjamin Franklin (1997) is world famous. He has been a contributor to periodicals such as American Literature, New England Quarterly, and Virginia Magazine of History and Biography. He has served as an editorial board member of American Literature and the William and Mary Quarterly.

Dr. Lemay has been a member of the University of Delaware Library Associates since 1978. He has served on the Board of Directors since 1979 including service as an officer from 1985 to present.

The Annual Faculty Lecture will be followed by a reception. The event will be open to the public. Interested persons can contact the Office of the Director for a printed invitation at 302-831-2231.