Keyboard focus is
sdiff
Sign up to receive news via email 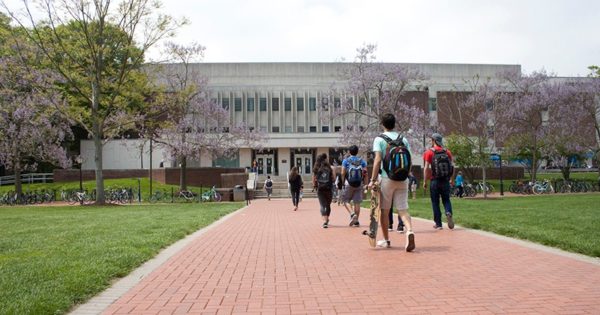 The University of Delaware Library, Museums and Press made a significant jump in rank for the Association of Research Libraries (ARL) Library Investment Index. For the 2015-16 academic year, the Library moved from 81st to 69th position in a ranking of university research libraries in the United States.

Published in The Chronicle of Higher Education, the rankings provide a quick overview of the size of each library’s collections alongside its ability to provide services to students, faculty, staff and visitors.

“Our library is truly the heart of our institution, and its resources are invaluable to our students, faculty, staff and community members,” said Interim Provost Robin W. Morgan. “This rise in the rankings reflects the commitment and hard work of our entire library team, and I thank them for their dedication to our campus community.”

The improved ranking aligns with the exciting year of change the Library experienced during the 2015-16 academic calendar. After welcoming Trevor A. Dawes, the new and nationally known vice provost for libraries and museums, the Library merged with University Museums. The organization was renamed the UD Library, Museums and Press to reflect the merging of resources dedicated to supporting and streamlining student success.

As the newly merged organization shaped its strategic directions for the years ahead, it strengthened several of its core commitments.

To ensure a continued concentration on student success, it strengthened its commitment to scholarship and pedagogy. As such, the UD Library, Museums and Press:

It also renewed its commitment to space, safety and ensuring it remains an inclusive and welcoming environment.

While the UD Library, Museums and Press is dedicated to improving all methods of student success, it also is committed to its role as a community resource. As such, it makes collaboration and community engagement a priority.

The merged organization continues to focus on these core commitments while redefining the modern research library, with a particular focus on technology and digital scholarship. With a foundation of inclusive excellence, organizational effectiveness and enhanced user experience, the UD Library, Museums and Press focuses on the future through the lenses of student success and learning; research, scholarship and discovery; Library as place; and partnership and collaboration.

“It is wonderful to see the Library recognized through this ranking for its work to support the students, faculty, staff and greater community in teaching, research, service and learning,” said Dawes. “As an intercultural space on campus, the UD Library, Museums and Press is integral to developing a sense of community for the University and supporting the efforts of all those within it.”