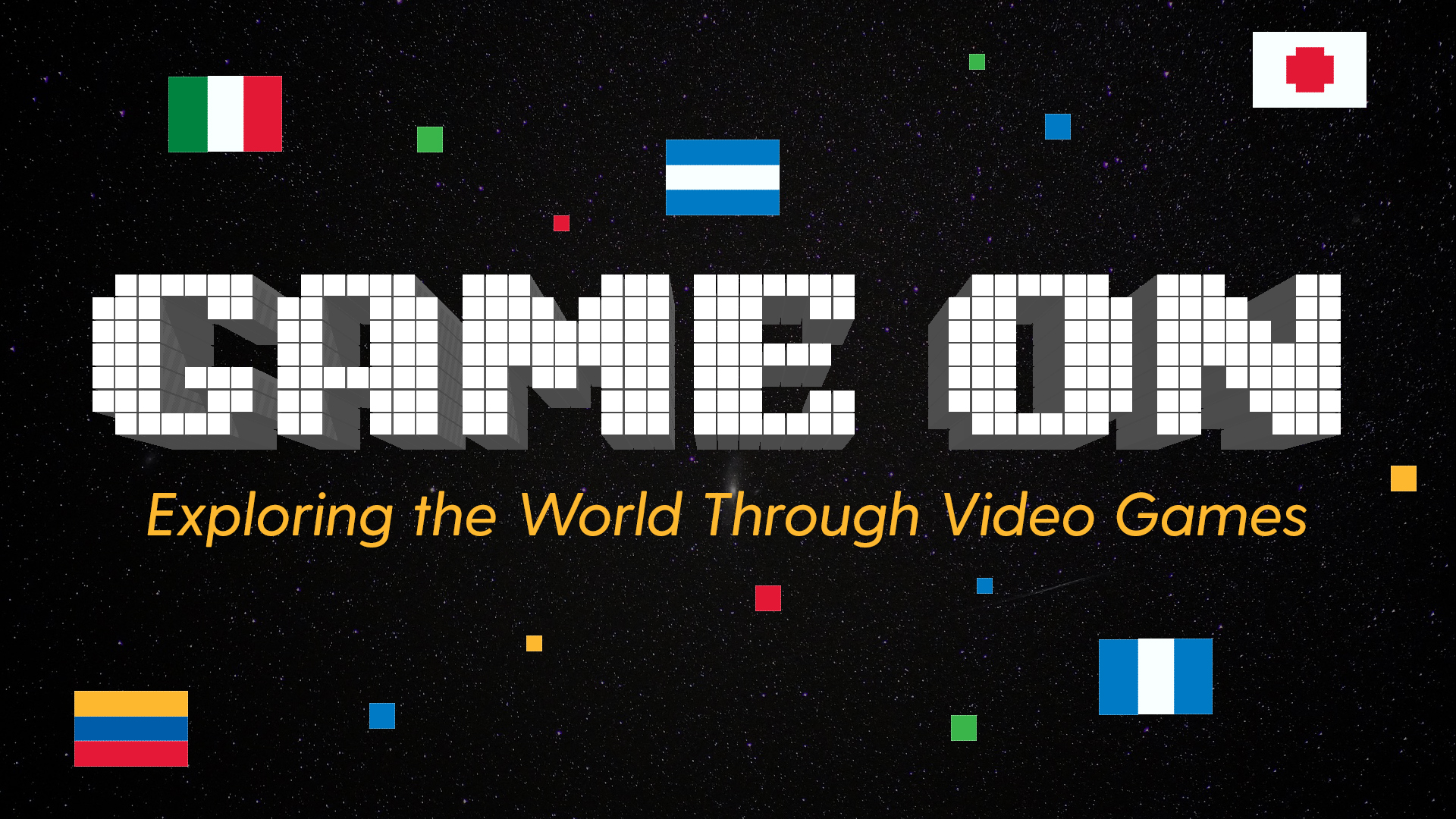 Tucked away on the Lower Level of Morris Library is the Film and Video Collection. Inside, you’ll find the fan-favorite DVD and Blu-Ray collection, as well as the lesser-known video game collection. There, you’ll find more than 300 games for Sony, Sega, Nintendo and Microsoft consoles.

In the same way that books, films and other study materials are made freely accessible to everyone through the Library, video games are available to check out or to play on new and old consoles alike in carrels within the Film and Video Collection.

Video games have proven to be an excellent engagement and learning tool—and not just for those pursuing a Game Studies minor, which has more than quadrupled in size since it was introduced in 2015.

“The gaming resources in the Library’s Film and Video Collection … have been an invaluable resource to help students understand the past and present of video game design and game culture,” Phill Penix-Tadsen, associate professor of Spanish and Latin American Studies, said. “From the feeling of physically pushing the plastic game cartridge into the Retron console, to playing games on their original hardware, to group work in the Virtual Reality [studio], the Library’s gaming resources help students think about video games not just as a ubiquitous form of popular entertainment, but as the object of rigorous academic analysis.”

As it turns out, Penix-Tadsen isn’t the only professor on campus who integrates video games into their coursework. He has company from professors in departments such as Art and Design, Communication, Computer and Information Sciences, English and Music.

But one department, in particular, stands out for just how much they weave video games into the very fabric of their syllabi: the Department of Languages, Literatures and Cultures. Several professors within the department work closely with staff from the Film and Video Collection to build assignments and use video games to showcase the cultures they study.

Join us for a quick trip around the world to see how video games can be used to explore foreign cultures—and help us to reflect on our own.

Throughout the course of Penix-Tadsen’s “Video Games and Latin American Culture,” students play nearly 40 video games, including Lucha Libre AAA: Héroes del Ring and El Chavo Kart. The goal isn’t to get their name in the top slot of the scoreboard, but to explore the economic, socio-political and cultural impact the game—and the act of gaming—has within the global community and the Latin American society. 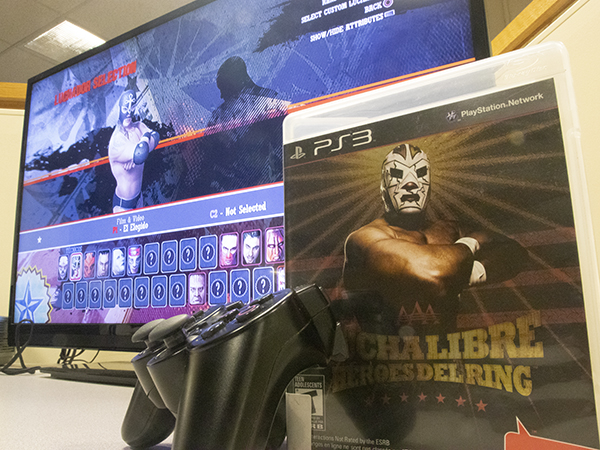 Students can play Lucha Libre AAA on the Playstation 3 gaming station in the Film and Video Collection.

As part of the course, students have to prepare a presentation on a specific game or game developer that delves deeper into these cultural impacts. They analyze individual aspects of the game to learn how it reflects and portrays society—and what that representation conveys, for better or worse.

Who created the game, and what was the budget? Which platform is it created for? Is the tone realistic, serious, humorous or critical? How does it use music, dialog and sound effects? What is the role of the player, and what types of choices can they make? Are the art and graphics of high or low quality? What are the prevailing themes, plotlines and languages? Is it like other games?

By taking a close look at these games and asking thoughtful questions, students can recognize the impact of video games globally, as well as within specific cultural contexts of Latin America. By studying regional gaming practices, they can make connections between cultures and the way those cultures are represented within games. By looking at the larger picture, they can understand and defend how video games and other media go far beyond the world of entertainment and can instead be used for education, political protest and artistic expression.

In Professor Rachael Hutchinson’s “Japanese Visual Culture” course, freshman honors students dive into the world of manga, anime and video games to explore how media can impact an individual and a culture. Together, the class explores themes like absentee parents, anxiety of nuclear power and history as memory. 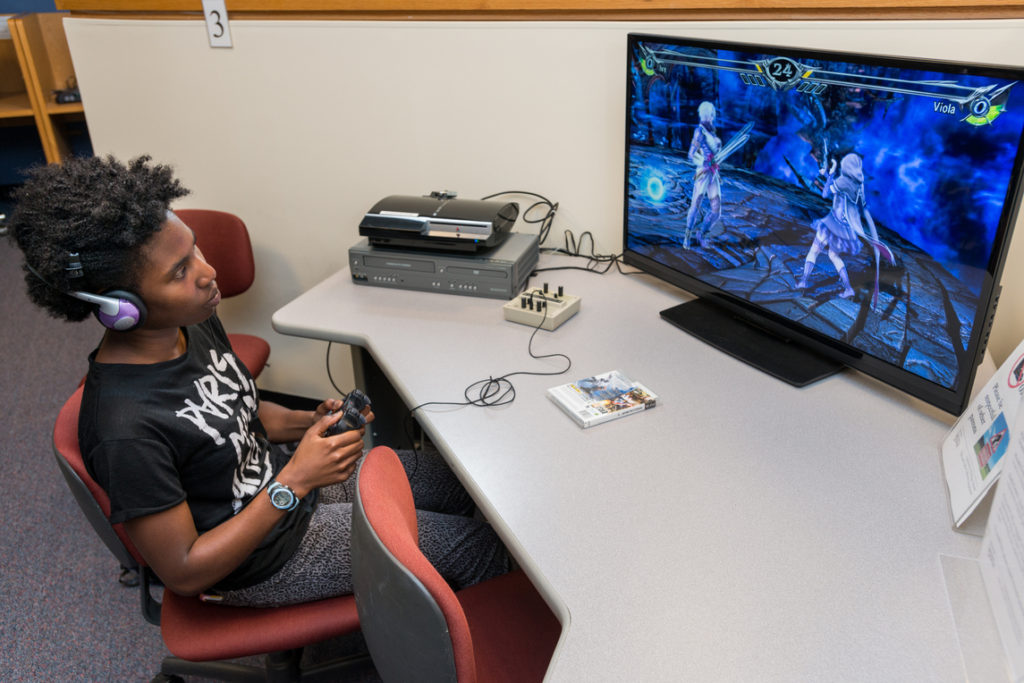 A UD student plays Soul Calibur on a gaming station in the Film and Video Collection.

To dig into the idea of gender stereotypes, the class turns to Japanese fighting games like Soul Calibur. Tasked with playing the game as various player-characters, the students must reflect on the effect each character has on their person and their gameplay.

When playing the game, students draw conclusions about how gender stereotypes are presented in the game and how those stereotypes influence how the game is played. As the students play with various characters, they make note of elements that both enhance and detract from the player’s identification with the character—the aspects that make them feel like they are or are not the character.

For instance, does an unrealistic body type prevent the student from connecting with their character? Does it impact the student’s self-image? Do the skills associated with a given character factor more into the decision to play them than their appearance? In asking these questions, students not only gain insight on Japanese culture and its treatment of gender stereotypes, but they learn about themselves and their own reaction toward gender stereotypes.

Hutchinson, associate professor of Japanese Studies, has taught this course several times as well as “Critical Approaches to the Japanese Videogame.” With this experience, she published research on the impact of gender stereotypes and encourages students to further explore this multilayered effect.

Would you like a glimpse of life in Renaissance Italy? If so, let us recommend Assassin’s Creed II, set in Renaissance Florence, and Professor Meredith Ray’s “Italian Civilization and Culture I.” 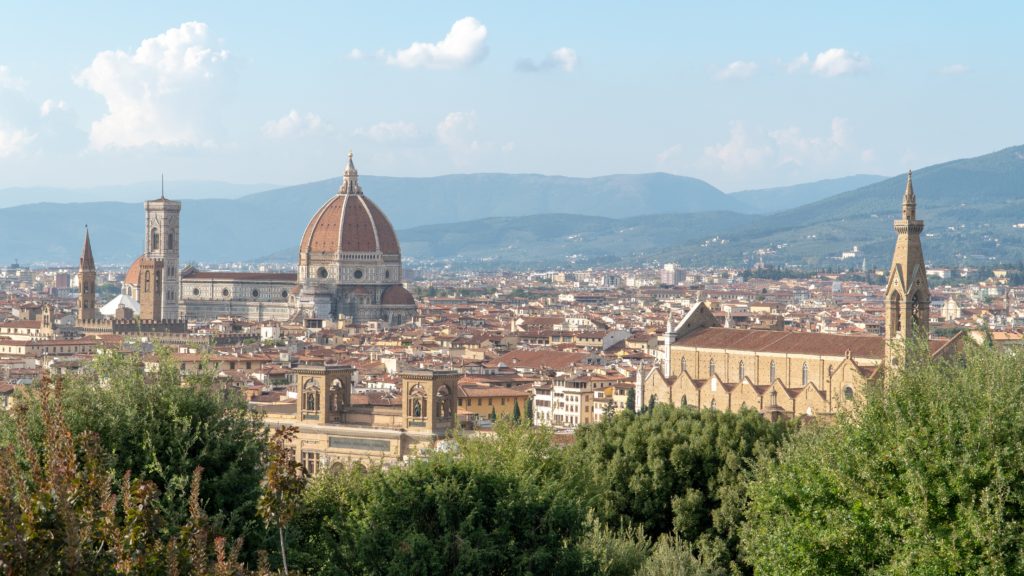 Bringing together video games and research into a single assignment, Ray, professor of Italian, uses the video game to shed light on major cultural, social and political developments in Italy through the 15th century. For the assignment, students work in groups, playing the game with the language option set on Italian. As they play, they must log their reactions to various aspects of Italian culture they encounter along the way.

In addition to considering the overall presentation of Renaissance Florence, students comment on how significant plot developments within the game relate to actual historical events. They log the historical figures they encounter, such as Leonardo da Vinci and Lorenzo de’ Medici, as well as the types of characters, like soldiers, town criers and courtesans, and identifiable architectural spaces, including bridges, churches and piazzas.

With extensive knowledge of the game and its representation of Renaissance Florence, the groups then work together on a presentation that highlights a historical figure, event, artwork or theme that interested them in the game. Whether it’s the role of women in Renaissance Florence or Renaissance medicine and disease, the group researches the topic, making sure to note where the information in the video game wasn’t accurate—and how the truth impacts the image of Italy the game puts forth.

After a quick trip around the world, we are back in Morris Library. For coursework, it’s essential that students can have these engaging and interactive learning experiences right here on campus.

Film and Video Collection staff work closely with faculty across a variety of departments to facilitate tailored assignments and instruction with video games. If a new assignment requires titles or consoles not yet in the collection, staff work to acquire them so they are readily accessible to students.

“I could not teach my game classes without the support of Film and Video Collection or the dedicated faculty and staff who help us with the materials,” Hutchinson said. “My course on Japanese video games is predicated on the idea that students will all have equal access to the materials on the syllabus. This means that anyone can take my course with no prior experience of gaming or access to expensive game consoles at home. … [The Film and Video Collection] truly is a wonderful resource and makes UD a real center for games research and teaching.”