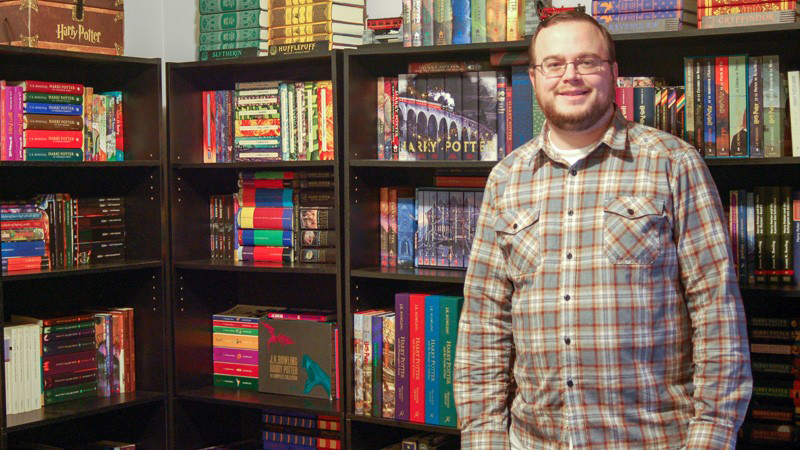 Sean McAllister, a microbiologist who earned his doctorate from UD in spring 2019, has an extensive multilingual collection of Harry Potter books. His collection consists of authorized translations of 'Harry Potter and the Philosopher’s Stone' — one of the most translated books in history — and unique cover art across the entire series.

Editor’s Note: This is the second in a series of articles highlighting the winners of the first Seth Trotter Book Collecting Contest, hosted by the Friends of the University of Delaware Library. Discover the magic of the wizarding world in every language through microbiologist Sean McAllister’s collection of ‘Harry Potter and the Philosopher’s Stone’ translations.

In high school, microbiologist Sean McAllister studied Spanish. To practice his reading of the language, his parents gifted him the Spanish translation of Harry Potter and the Philosopher’s Stone by J.K. Rowling — the first book in the series McAllister already loved. 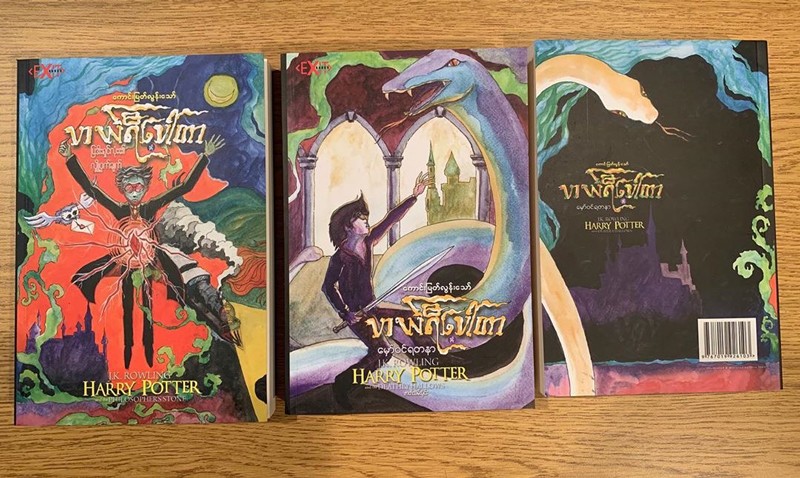 Inspired by the Rosetta Stone, McAllister set off on his mission to collect all authorized translations of the first book in the Harry Potter series to create a library of identical texts featuring the world’s languages.

With 97 different authorized translations, transliterations, adaptations and variants — and more still appearing — Harry Potter and the Philosopher’s Stone was one of the 20 most translated books in history, as of December 2019.

Hawaiian, the newest translation, was published just last year. It is only the second time the book has been translated to an indigenous language — a subject McAllister is especially interested in. 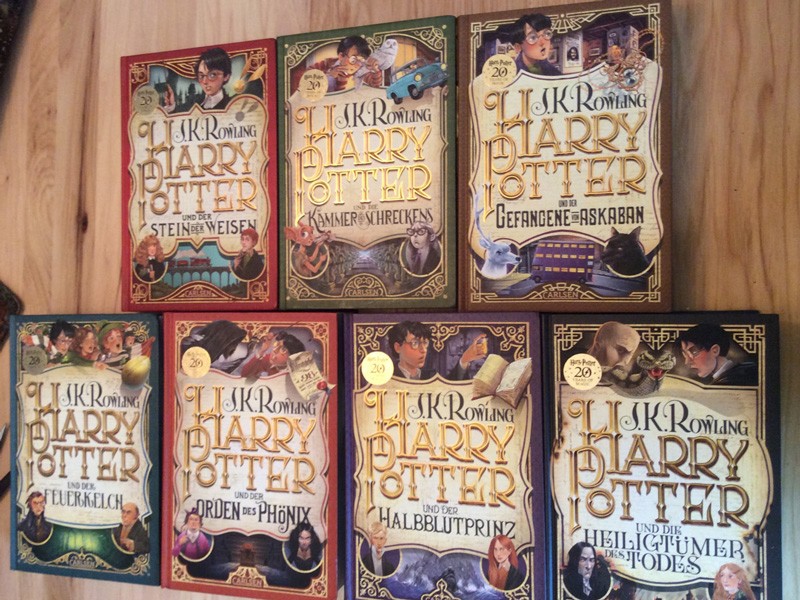 In addition to authorized translations, Sean McAllister collects unique cover art variants across the entire series. Many countries celebrated the 20th anniversary of the first book, including Germany, where publishers released an anniversary set with new cover art for all seven books in the series.

“Publishing indigenous languages in Harry Potter connects the popularity of Harry Potter with trying to preserve those languages from extinction in young language learners,” he said.

As his collection grew and new translations were published, McAllister, who received his doctorate from UD in the spring of 2019, became interested in the various cover illustrations. With this new interest, he began acquiring all original cover art across translations of all seven books in the series. This soon expanded to include original sketches and commissioned artwork from the series illustrators.

“Many languages were represented by unique art that reflected interesting cultural preferences,” McAllister said. “Illustrations capture a lot about the culture. That’s why I love collecting the cover art. You read the book; you have the image in your mind’s eye. But I love seeing how other people interpret it.”

Between the authorized translations and unique cover art variants, his collection currently sits at 442 books, in addition to book illustrations. 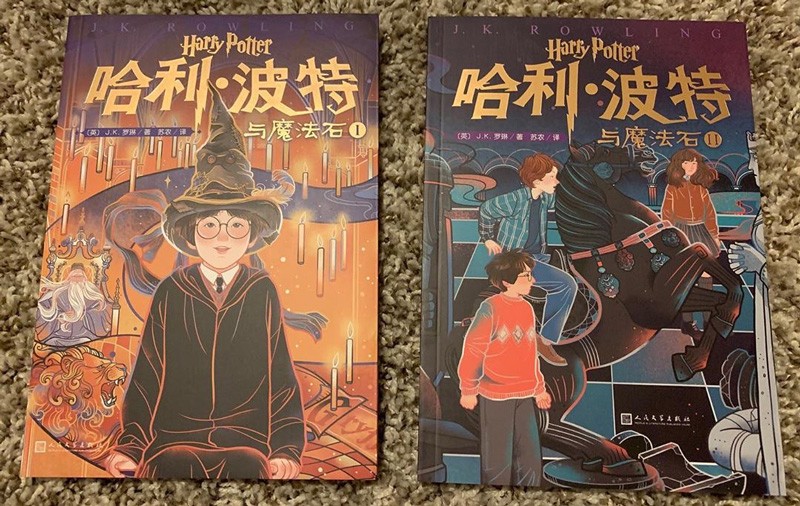 Sean McAllister collects unique cover art variants across the entire series. The new official publication of ‘Harry Potter and the Philosopher’s Stone’ in Chinese comes in two volumes with new artwork for each.

As an oceanographer, McAllister travels around the world to different countries, affording him the opportunity to discover some of the titles in person. When he began collecting in the early 2000s, he primarily acquired the translations that pertained directly to his life — translations related to the languages he studied, countries he visited, gifts he was given.

After his initial phase of in-person collecting, McAllister turned to the internet. There, he developed a worldwide network of friends and allies to help him locate specific translations. While he’s learned quite a bit about the languages of the world, he doesn’t speak them all — but that’s no barrier for this collector. McAllister uses Google Translate to open up lines of communication with native speakers around the world, often connecting with people through Reddit, social media and video chats. He shares photos of his collection via his Instagram account @mcallister_alaskagrown. 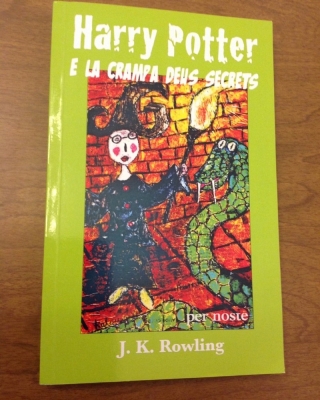 Sean McAllister collects unique cover art variants across the entire series. This unique cover art is for the Occitan translation of ‘Harry Potter and the Chamber of Secrets.’ Occitan is a Romance language spoken in parts of France, Italy and Spain.

This last translation — the Malayalam, an official regional language of India — is notoriously one of the six hardest translations to acquire. To do so, McAllister may have to travel to the Indian state of Kerala to get his hands on it — a prospect he considers with excitement.

As McAllister hunts for the final titles of his collection, he has begun to act as an aide for others trying to expand their collections. He particularly enjoys helping others find seemingly rare and impossible-to-find titles.

Even though he’s only three titles away from a technically complete collection, McAllister knows as long as they keep translating the book into new languages and releasing new cover art, he’ll keep collecting.

McAllister earned third place in the 2019 Friends of the University of Delaware Library’s Seth Trotter Book Collecting Contest. The first installment in the series was about graduate student Joseph Nakao. The Friends created the contest to encourage reading and research, the creation of personal libraries, and an appreciation of printed or illustrated works for pleasure and scholarship among UD undergraduate and graduate students. Students can learn more about the 2020 Seth Trotter Book Collecting Contest, including how to submit their applications on this website.