Note: This page was updated to accurately reflect the timing for public availability of the papers.

The University of Delaware Library has acquired the senatorial papers of Joseph R. Biden, Jr., who was elected to a seventh term in the U.S. Senate in 2008, but resigned in January 2009 when he was sworn in as the 47th vice president of the United States. More than 1,850 boxes of archival records from the Vice President’s Senate career arrived at the Library on June 6, 2012. The collection, which also includes extensive electronic records and media, will remain closed pending completion of processing. The records will be available no sooner than the later date of December 31, 2019, or two years after the donor retires from public life. Information related to the senatorial career of Joseph R. Biden, Jr., is available through the records of Congress at the National Archives and Records Administration, the published proceedings of Congress, and the extensive archive of C-SPAN. 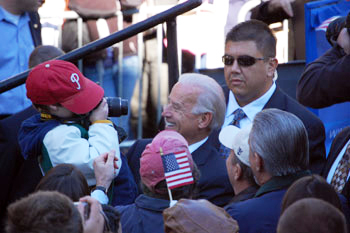 When Biden was sworn in on January 3, 1973, he was the sixth youngest senator in the history of Congress. When he resigned, Biden had served longer than all but fourteen of the 1,931 members of the Senate since 1789. Eleven of those fourteen long-serving senators were colleagues of Biden’s, reflecting the depth of understanding scholars may hope to find in areas of leadership, legislation, and public policy. The Biden senatorial papers join other archival collections related to policy and government at the University of Delaware Library, notably the congressional papers of several former members of Congress.

News about the gift of the Biden senatorial papers is available from several sources:

Biden, a U.S. Senator from Delaware for 36 years until his election as vice president in 2008, and a 1965 graduate of UD, was on campus to donate his Senatorial papers to the University Library and to deliver the inaugural James R. Soles Lecture on the Constitution and Citizenship
UDaily, September 16, 2011