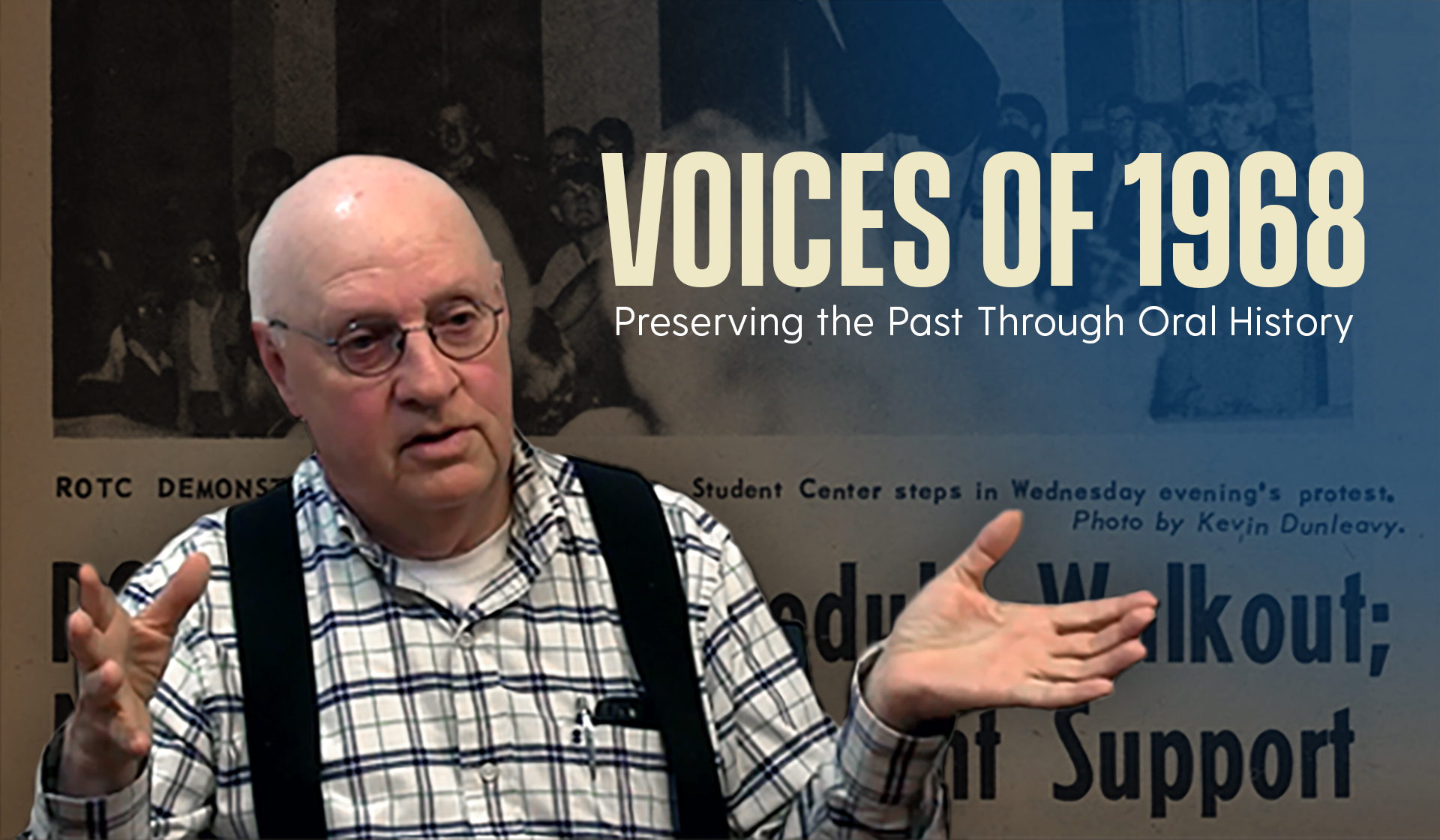 In 1968, tensions ran high across the nation. Anti-war sentiments and demonstrations against the Vietnam War grew, and an already fraught civil rights movement escalated with the assassination of Martin Luther King Jr.

It was a tumultuous year for America, but, perhaps, even more so for Delaware.

As in other areas across the country, rallies, riots and demonstrations occurred in the wake of King’s death. But in Wilmington, these actions led to the nine-month occupation of the city by the Delaware National Guard—the longest occupation of an American city. 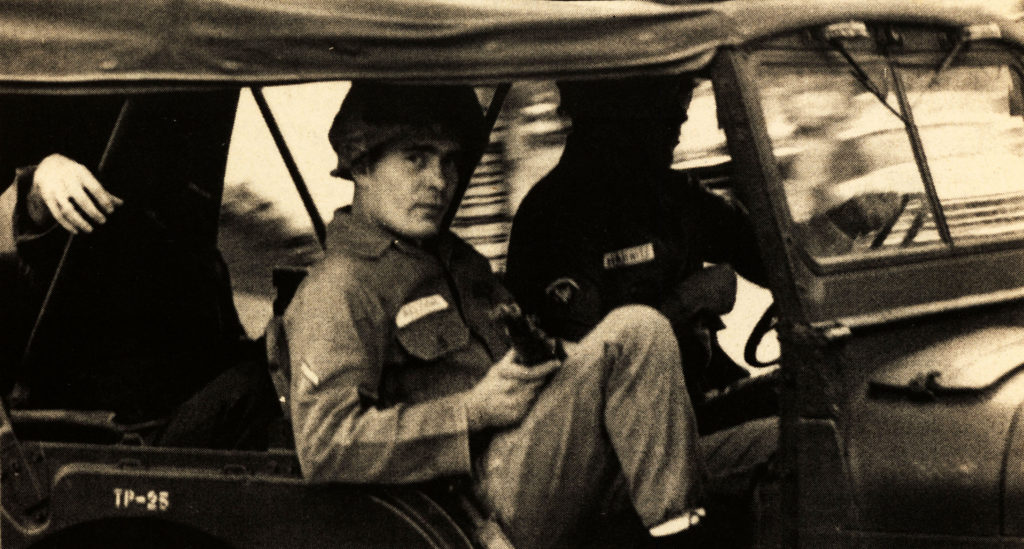 Delawareans and the UD community lived through these challenging and unusual times with important stories to tell, even if they didn’t make national headlines. The Voices of 1968 Oral History Project from the UD Library, Museums and Press aims to capture those stories, to contextualize and localize history in the words of those who lived through it.

There are stories from students who were on campus in 1968. The editor of The Review tells how the student newspaper covered social issues of the day. A student activist recounts his role in the non-violent sit-in at the UD Student Center. Another student activist recalls the moments surrounding the iconic images he captured of a student arrest and the police riots at the Democratic National Convention in Chicago.

In fact, stories of protests and demonstrations appear throughout many of the oral histories thus far, even from individuals who didn’t consider themselves activists.

Take, for instance, Ken Wiggins Jr, a UD student in 1968 who was activated as a Guardsman in the Delaware Air National Guard for five to six weeks of duty in the wake of King’s death. He shared what he experienced as a Guardsman during the Wilmington Occupation, as well as stories from life on campus.

While sympathetic to the anti-war movement, Wiggins was not overly active in it. He was, however, opposed to the mandatory University requirement that all male students participate in ROTC—and he wasn’t alone in his opposition. While he opposed the requirement because he was already a member of the military, others thought there was no place for the military on campus or objected to the Vietnam War. In protest, students came together in a ROTC “walk-off,” where students planned to walk off the ROTC practice en-masse. 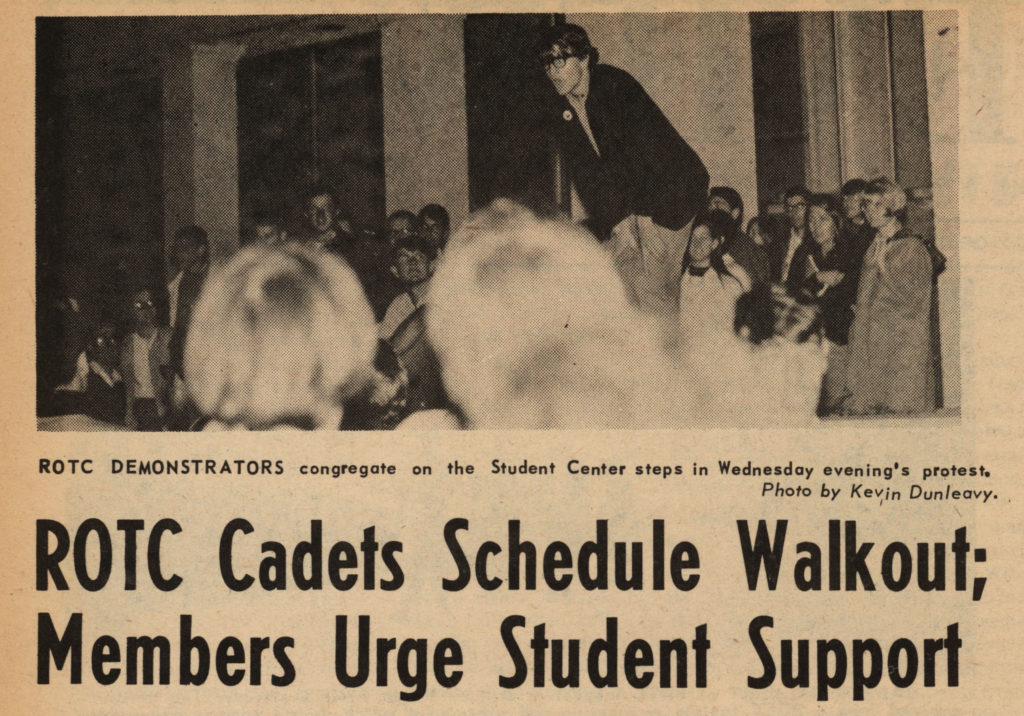 “I had a Volkswagen bus and it was all painted up,” Wiggins recalled with a smile during his oral history. “I was an art major. It said ‘Flower Power’ on the side and all that sort of thing … For whatever reason, I wasn’t in the parade that particular day, so I drove by and I tooted the horn. And that was supposed to be the signal for the walk-off.”

Only a handful of students actually walked off, Wiggins explained, but ultimately it was a success as the University did drop the ROTC requirement.

Firsthand accounts like these allow for better preservation, understanding and engagement with history. In this instance, records may show the one-time University requirement, but with these stories, people can better understand the sentiments that led to its removal. Oral histories place real individuals and emotions within the context of history.

“I remember the Newark Post reported [on the walk-off],” Wiggins recalled. “It said Volkswagen bus sped away or something like that. I was not speeding. In fact, I was really trying to be very deliberate,” he laughed. Instead of relying on an observer or reporter, oral histories allow history to be recorded straight from the source—the driver of the bus. They help to preserve history as it happened.

The Voices of 1968 Oral History Project is ongoing. With each new oral history, the past is better preserved and the realities of history better documented. The oral histories collected this far will be available digitally through the Library, Museums and Press by the end of September 2018.

We want to add your voice and your history to our collections. If you were in Delaware during 1968, we invite you to share your story with us.

To participate, contact Special Collections to schedule a time to visit Morris Library and share your history.

In conjunction with the project, you can view the online exhibition 1968: Heterodoxical Times in Delaware. This exhibition, which has a strong focus on the activism of Students for a Democratic Society (SDS), includes information from student yearbooks and newspapers as well as archival information. The limited documents and materials from this time underscore the importance of The Voices of 1968 Oral History Project.