On a typical day, you’ll find Alex Galarza one of two places. He’s either in a conference room, consulting with a researcher to learn about the goals of their project, or he’s at his desk—which he’s decorated with the scarves of his favorite soccer teams—creating tailored options on how best to move that research project forward.

As a digital scholarship librarian, Alex is passionate about helping students and faculty tell the story of their research using interactive and engaging tools, such as maps and interactive timelines. With expert guidance from Alex and his colleagues in Digital Scholarship and Publishing, researchers can use these digital methods to add depth and dimension to their work.

For Alex, this type of work has long been a part of his professional life. The extensive research he has conducted as a graduate student and a digital scholarship librarian all center around his use of digital methods.

As a graduate student, Alex wanted to study soccer and politics in Argentina. To do this, he focused his research on the Ciudad Deportiva, a planned sports complex for the Boca Juniors in the 1970s that was never completed. The overall complex was for sports and recreational activities beyond just soccer, everything from a fishing club to fine dining.

“It was like this project that you always grew up hearing about that animated the whole city in a way,” Alex explained. “There was this aura of mystique around this huge project that never got finished.”

Through this lens, he took a close look into urban politics, how the city of Buenos Aires developed around the project, and how soccer clubs like Boca Juniors animated everyday politics in the city.

But Alex didn’t want to write a traditional dissertation. Instead, he took an avid interest in digitizing all of his sources and developing an online persona around the work he was doing. Working with a group of journalists, Alex also created a documentary about his research, which allowed him to translate his research into a narrative story that captures the attention of academics and non-academics alike through the engaging and easily accessible platform of video.

The documentary also gave him the opportunity to make his research more accessible to those in Buenos Aires who would be most impacted by it. For Alex, it was important to give something back to the research community he worked with and those who shared their knowledge and experiences with him. 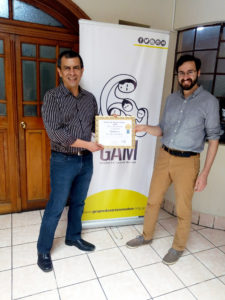 Due to his work with the GAM Digital Archive Project, Alex was awarded honorary membership by the Grupo de Apoyo Mutuo.

The idea of making his research accessible and impactful is one Alex carried with him.

During the war, which lasted from 1960 to 1996, state security forces targeted anyone deemed subversive. One of their tactics was forced disappearance, especially for young activists. The GAM—a human rights group in Guatemala—formed to demand justice for the disappeared, loved ones they knew would never return home.

The group has an incredible collection of physical case files on individuals who have disappeared. In Guatemala, it is actively disputed this type of violence ever occurred. In partnership with the GAM, Alex, his colleagues and a handful of undergraduate students created a digital archive of these case files to help shape a more accurate historical narrative.

The public-facing website acts as an online exhibition, moving people through select case files that the project has received explicit permission from family members of the disappeared to share. The back-end of the website serves as an amazing research tool, allowing researchers to collect qualitative and quantitative data from all of the digitized case files.

The multilayered project is a feat of digital scholarship, incorporating elements of data visualizations and mapping, text mining, timelines, and metadata for enhanced search capabilities. The team built the archive’s tools so that all researchers, no matter how familiar or comfortable they are with back-end development, could use them to engage with their own studies and projects.

Both Alex’s research on soccer in Argentina and with the GAM Digital Archive Project highlight how digital methods can enhance a project and its outcomes, which make them both excellent examples to share with the UD community to introduce them to the possibilities of digital scholarship.

In classes at UD, like Race and Ethnicity in Latin America and Intro to Latin American History, Alex has shared his research passions with students, connecting over the subject matter while simultaneously emphasizing how the digital methods he used ultimately shaped his research.

“I’m always thinking first about the learning goals of the class,” Alex explained his approach. To keep the class more conversational and less presentation-based, he often builds his approach around think/pair/share exercises that allow the students to engage with the material and with one another. For those whose interests are piqued in how to tell the story of their research using digital methods, he sets up meetings to discuss their research interests.

“We [in Digital Scholarship and Publishing] work with a lot of people who are genuinely interested in the method itself; they are genuinely fascinated by text mining or data visualizations and they want to get a broad exposure to it,” Alex said. “But many, if not more, don’t really care about the intricacies of the method. They want to answer a question, and we are really adamant about putting questions before tools.” 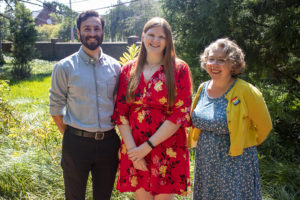 Alex Galarza and his colleagues in Digital Scholarship and Publishing, including (L-R) Kayla Abner and Paige Morgan.

The Digital Scholarship and Publishing staff work with the researcher to get excited about the question, to delve into the heart of the research, in order to present tailored guidance and options for best paths forward when it comes to technology and digital methods.

“I think many of us are in this line of work because we love so many aspects of working with students,” Alex explained. “We see students learn, we get to know folks in the moment where they’re becoming whoever they want to be, and we explore together. You learn so much from working with students about things you thought you knew a lot about. All of a sudden, you have a perspective change by the way a student puts something.”

In a way, that sense of wanting to see something succeed is often how students become proficient in digital scholarship. When they care so much about the topic, they take the necessary steps to do it justice by incorporating digital elements that enhance how others can engage with and access it. Then, without realizing it, they understand the technology necessary to achieve that elevation.

As Alex shared his research with students studying Latin American culture, several UD students expressed interest in using the GAM Digital Archive Project for their own research projects and in helping to continue the important work of the GAM.

Recently, the University of Delaware received a grant from the Andrew W. Mellon Foundation—an organization that supports initiatives that strengthen the humanities, arts, higher education and cultural heritage—to support the publication of digital exhibits based on case files from the GAM.

With this grant, Library staff and others in the UD community will be able to complete a year’s worth of work on the important project. It will also provide opportunities for those students interested in working on the project to do so through paid positions or internships.

For Alex, the professional and personal experiences students get from working on this project is essential. He wants students to walk away with skill sets, rather than simply learning something to accomplish a task. “We need to build in learning experiences, rather than just churn out labor on the project,” Alex said. “It’s really important to invest time and experience in the people who are giving a lot of themselves on the project.”

But the technical skills are far from the only reward when it comes to this enriching project. “In many cases, I’m working with first-generation Latinx or Latin American students who have their own personal histories of national episodes of violence and cold war violence,” Alex continued. “They see themselves making progress on professional goals but also personal goals of being able to relate the knowledge that they’re building to their own communities. That’s something I didn’t get a lot of as an undergraduate, and something I really want to fight hard to make sure students get.”