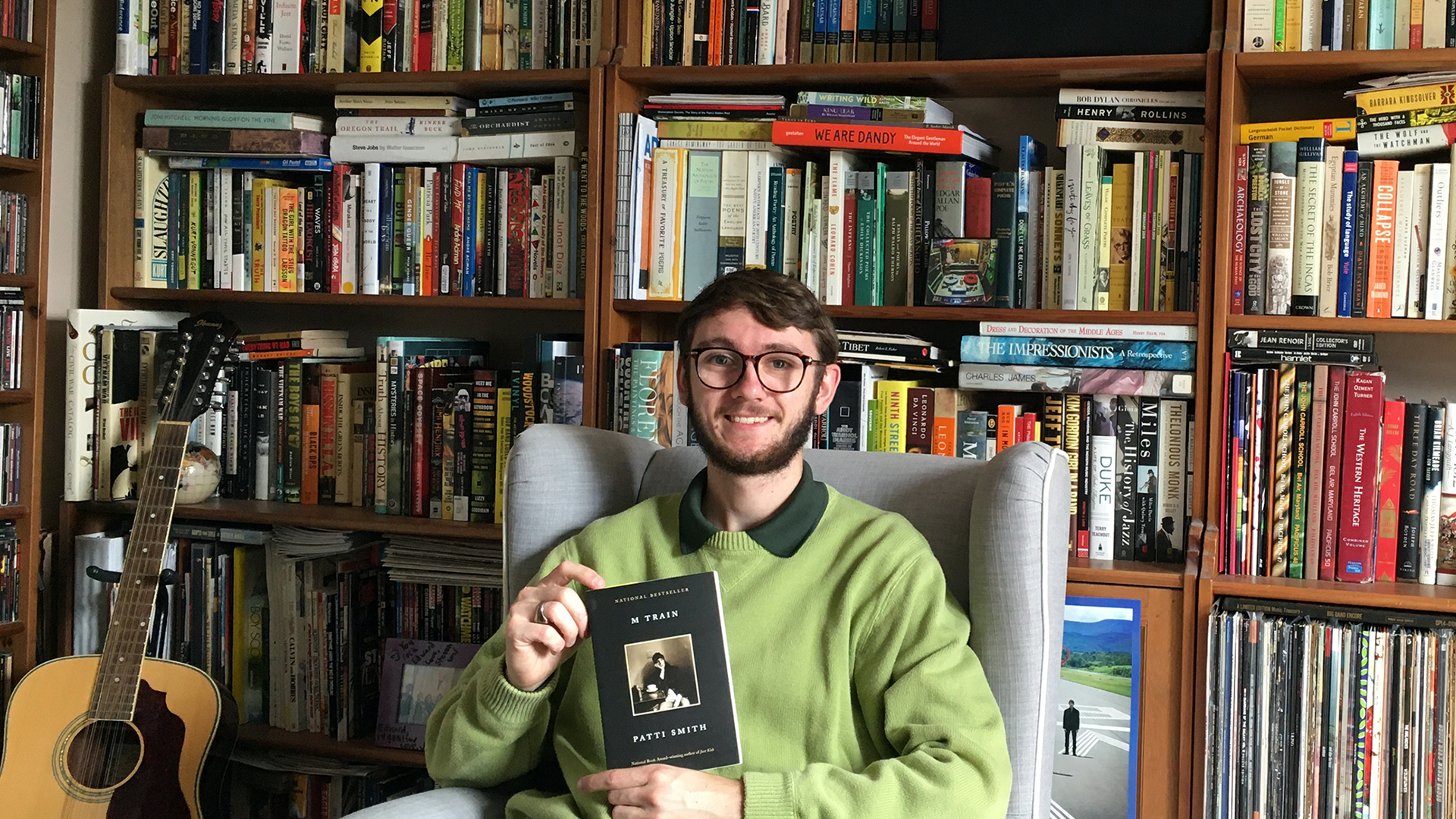 Edward Benner, a UD senior, won the 2020 Seth Trotter Book Collecting Contest. Here, he sits in front of the bookshelves where he stores his many active and growing collections.

This is the first in a series of articles highlighting the winners of the second annual Seth Trotter Book Collecting Contest, hosted by the Friends of the University of Delaware Library.

Edward Benner will be the first to tell you it’s “very rare” for someone to make a second trip to a bookstore with him. With no less than six active book collections, his weekly trips to bookstores are especially time consuming as he moves section to section in a state of sensory overload.

Edward, a senior studying English education, collects books of and on poetry, art and music, environmental literature, existential philosophy, and spirituality and religion. His largest and most nuanced collection focuses on the works of musician, author and poet Patti Smith and her influences and inspirations.

Collecting, it turns out, is in his blood. Growing up, Edward spent his time in flea markets, thrift stores and antique shops with his father, who is an avid collector of American military artifacts. While Edward wasn’t interested in military items, over time, he developed his own collecting interests, including books, photographs and vinyl records.

This experience growing up turned collecting into a meaningful activity. For each item, Edward has a memory of how, where and when he acquired it. 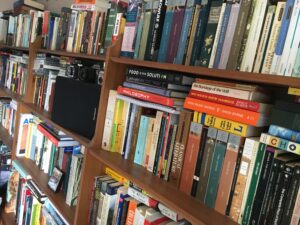 Another view of Edward’s packed bookshelves.

His childhood experience also instilled in him a love for used items. “I love it if there is some mark left on a book by either time or an individual who previously owned it,” Edward said. “While it is an object, you get so many elements of life within it.” A curled or dog-eared page, a note in the margins, a makeshift bookmark like an airplane ticket or park permit—these all represent the connection or interaction someone had with the book. (Edward even found a sonogram stuck in between the pages of a book once.) “When you get these little glimpses and snippets of life experience, it makes you feel that human connection. You’re sharing words, but you’re also sharing something deeper.” Edward continued.

This sense of shared experience is exemplified in Edward’s Patti Smith collection.

“I made a vow to actively procure used copies of books for my budding collection and to do so by traveling to independent bookstores,” Edward explained. “I value recreating the spirit of Patti Smith by embracing chance encounters and revealing mysteries of the pages at destined moments.”

Edward can easily list off his moments and memories of discovery for each title in the collection—discovering a copy of Roberto Bolaño’s 2666 just before a poetry reading in Philadelphia; finding a ripped paperback copy of J.D. Salinger’s Nine Stories while out with his little sisters; or stumbling upon a copy of Albert Camus’ A Happy Death while reuniting with a friend in Baltimore.

Of course, his literary meet-cute with Smith has a similarly rich story attached to it. About three years ago, Edward became fascinated with photographer Robert Mapplethorpe, seeking out all he could about the artist’s life and work. Smith was Mapplethorpe’s partner and muse in the late 1960s and early 1970s, and wrote a book, Just Kids, about their time together. As Edward read Smith’s book, he felt connected, inspired and understood.

“Smith’s voice and whimsical personality appealed and spoke to my sense of longing and constant searching for spiritual, literary and personal fulfillment as no one else had or could,” Edward said. “Before I was halfway through Just Kids, I knew in my heart that I had discovered my favorite author.”

But the book that inspired Edward’s collection was Smith’s second memoir, M Train. The memoir—one of the most important books to make an impression on Edward—follows Smith as she travels from one cafe to the next, visiting significant locations of artists and writers as part of her creative process.

“The amount of literary references in Smith’s work is staggering,” Edward said. “The admiration of and relationship with the authors and works Smith references is so convincing that I felt wholly compelled to acquire and read them for myself.”

Several of these references pointed directly to many of Edward’s biggest literary influences—Albert Camus, William Blake and Herman Melville—which made Smith feel like a kindred spirit. 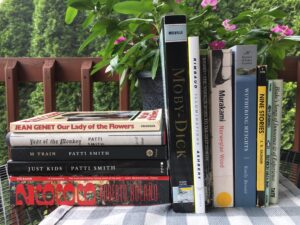 A closer look at some of the titles in Edward’s collection on Patti Smith and her influences and inspirations.

And thus, his collection was born. While Smith’s influences and references led Edward to authors he was more familiar with, like William Shakespeare and Emily Brontë, they also ushered him into new territory with figures like Japanese writer Haruki Murakami and French poet Arthur Rimbaud.

But Edward’s collection isn’t just a list of Smith’s influences—it is an embodiment of her nomadic spirit as he searches bookstore after bookstore for further insight and inspiration.

This past January, Edward took a solo trip abroad while working on his poetry to see a retrospective of William Blake at the Tate Britain. As he traveled through London, Dublin and Edinburgh, bookshops were a common stopping point.

“I spent two weeks walking from morning until night, getting lost in art museums, haunting cafes, writing incessantly, and stepping foot into, quite literally, every bookstore I encountered—all in the vein of Patti Smith,” Edward recalled. “From my simultaneous loneliness, excitement and creative fervor, I felt closer to her than I had before.”

As he wandered abroad, he found a number of titles for his collection he hadn’t been able to locate stateside, including a used copy of Our Lady of the Flowers by Jean Genet, Smith’s favorite author.

Along with these sought-after additions to his collection, the focus on William Blake—a major inspiration for both Edward and Smith—made the trip that much more poignant. While the Blake exhibition made Edward feel more connected with Smith, it also provided him a shared experience with so many others in the museum.

“When I was able to take my eyes off of Blake’s work and look up from my notebook, I realized that so many others were having the same powerful experience,” Edward said. “There were more people jotting down and writing than I had ever seen in a museum before. There was just a sort of reverence in the room.”

For Edward, these shared experiences rest at the heart of collecting. “To me, the purpose of collecting is making meaning and gaining insight for oneself by the appreciation and admiration of works written and owned by others—connecting experiences and history into a shared, breathing understanding,” Edward explained.

While collecting fosters a unique set of shared experiences, it is also deeply personal.

“Each acquisition for my collection has brought me fulfillment and happiness, tying the experience of finding them with the books themselves,” Edward said. “The tying of words, memories and inspirations allows me to learn more about my favorite author while learning about myself.”

As Edward collects and reads the works that have inspired his own favorite author, he not only expands his own realm of influences and exploration of literary history, but he can better understand why and what about her writing connects and resonates so deeply with him.

With a collection that is constantly growing, it’s a journey that will continue forever.