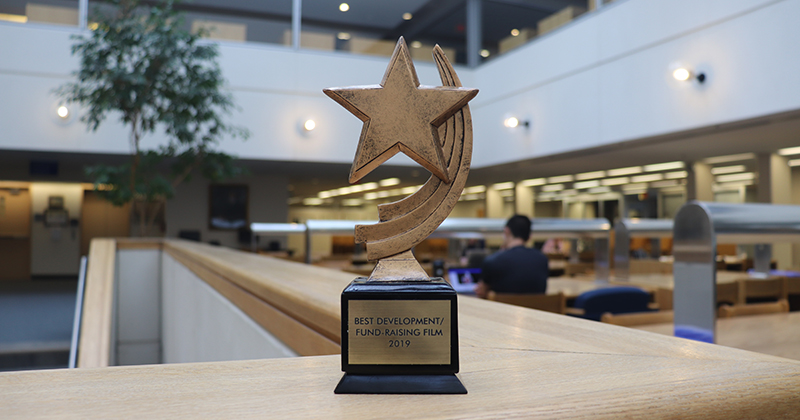 The UD Library, Museums and Press won the ARLie award for the best film in the development and fundraising category during the fourth annual Association of Research Libraries (ARL) Film Festival.

The University of Delaware Library, Museums and Press recently received two awards for its video “Student Success in Action,” which was created to appeal to potential donors and create advocates for the Library.

The video won the ARLie award for the best film in the development and fundraising category during the fourth annual Association of Research Libraries (ARL) Film Festival. The festival, held during the Spring 2019 ARL meeting in Minneapolis, showcases videos made by member institutions that highlight the institution’s libraries, spaces, services, collections and expertise.

The video also won a PR Xchange Award in the category for advocacy, fundraising, annual reports and strategic plans. The Library will accept the award at the awards ceremony during the American Library Association’s annual conference in Washington, D.C.

“It is such an honor to be recognized by our peers in the Association of Research Libraries and the American Library Association,” said Trevor A. Dawes, vice provost for libraries and museums and May Morris University Librarian. “I’m proud of the work our Communication and Space Planning Team has done to share Mike’s story, which demonstrates the vital role the UD Library, Museums and Press plays in the lives of our users. The video truly illustrates the power of storytelling, and we look forward to hearing and highlighting additional stories of Blue Hen impact and success.”

The video features the story of Mike Pfeifer, a UD alumnus of the Class of 2011, to illustrate the impact Library resources have on student success.